Over the past 35 years of my working life, I cannot remember a period of so much uncertainty. Brexit, climate change, political upheavals and the decline of organised religion to name but a few. On the plus side my portfolio of work is directly connected to a number of these challenges and helping to solve them. Brexit in particular, is connected to almost all of my current commissions. Last Thursday, I facilitated and moderated a 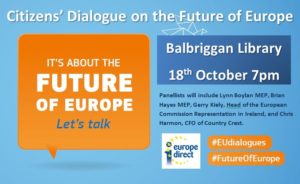 public meeting in Babriggan on the Future of Europe. We had a good turnout including a large group of secondary school children from Luttrelstown Community School.

The panel consisted of an MEP, EU Commission representative, Deputy Mayor of Fingal County Council and a Local Businessman. The session was interactive and it was the first time, since I have facilitated similar events over the past two years that many participants were looking beyond Brexit and towards a new Europe landscape. What was uplifting was the strong sense that participants want to be active and engaged in the Europe project, and they feel a responsibility to be active in this regard.

As a Fingal LEO mentor I am engaging with SMEs and advising them on their exposure to Brexit. It is hard for businesses to really prepare for Brexit as the consequent business practicalities are still unknown. Despite this filling out the online Brexit Scorecard is worthwhile as it opens up a range of potential supports to SMEs who are affected.

As I write Climate Change continues to deliver new unusual patterns of weather. In Fingal we continue to experience a very dry October but with an unusual Arctic blast expected over the coming weekend. A Category 5 Hurricane Willa is bearing down on Mexico and many parts of eastern Europe have been experiencing record breaking October heat.  One development I have noted in my role as Coordinator of the Horticulture Industry Forum is that Irish growers no longer debate whether climate change is real. Storms Ophelia and Emma plus the extraordinary summer drought over the past 12 months have horticulture growers focusing on the higher risks now involved in growing and wondering can they make a profitable living in the years to come. The tight margins paid by the retailers were already making our growers consider whether they could stay in business. Unless we support them and enable them to earn a more secure income, climate change could persuade many to leave growing and the nations food security in a volatile world would become even more precarious.

CALL STIOFÁN FOR A CONSULTATION